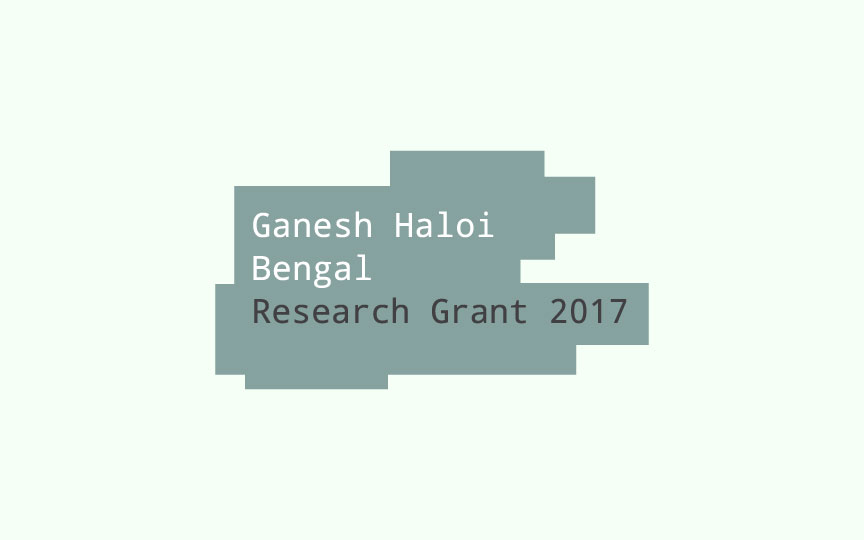 The Ganesh Haloi Research Grant has been set up by Bengal Arts Programme to encourage original research and critical writing projects furthering the understanding and appreciation of the Arts of, from, or relating to the greater Bengal region. Attributed biennially by an independent jury, the grant of 2 lacs Bangladeshi taka is supported by the generosity of the artist Ganesh Haloi.

The grant aims to encourage artists, critical writers and researchers in developing focused research on art for which they might not find appropriate funding otherwise.

The grant to be attributed once every two years by a specifically appointed jury is intended for small-scale and original projects that can be completed within a 12-month time frame.

Ganesh Haloi, Born in 1936 in Jamalpur, now Bangladesh, moved to Kolkata after the partition. The trauma of the uprooting left its mark on his work as it did on some other painters of his generation. He is one of the few artists whose works represent the essence of the greater Bengal region. His artistic journey include a great deal of research works including study of miniatures at Banasthali (Rajasthan) and research on Ajanta frescoes for six years in the initial days of his career.

The Grant calls upon proposals exploring a well-defined central question leading to detailed research proposal. The grant is not intended to support doctoral thesis or similar large-scale investigations. The Grant only supports original research projects which have never been published, in all or in their parts;

To be considered, an application should consist of:

• A detailed synopsis of the research project of maximum 1000 words;

• Bio of the researcher (maximum 300 words) including references of previously written research works/ essays (if any) ;

• A detailed budget of the costs incurred by the research project, and a break-down of the expenses made with the amount of the Ganesh Haloi Research Grant; Template

• A detailed 12-month time-line of the research project. Template

• All the documents should be sent to artsprogramme@bengalfoundation.org by 12 am of September 15, 2017.

Any adult citizen is eligible to apply. Applicants to the Grant should be the original author(s) of the research project. No third party application is allowed. Research projects led by two or more authors will be considered.

Scope of the Grant

Examples of areas of interest for the Grant are given below:

• History and evolution of art movements

• History and evolution of art institutions

• History and evolution of art exhibitions

• Artists collectives and their history

*This list is indicative only, we also encourage projects with other areas of interest.

1. A specifically appointed body of jury consisting of artists and researchers will evaluate the applications

2. The selected research project will take the final form of a written text of a minimum of 7500 words in Bengali or English;

3. In addition to this text, and in order to contribute to the general research on visual arts in Bangladesh and its region, the awarded candidate will be asked to entrust the final work to Bengal Foundation with the aim to make them public and available for reproduction.

4. The final work must mention:

• Bibliographies used for the research

• Inventories made during the research

• Records or unedited transcript of interviews made for the research

5. A representative of the Arts Programme of Bengal Foundation will assist the grantee during the entire period of the grant, and will provide advice and guidance on his/her research project if required.

6. The awarded candidate will participate in a dedicated event which will take the form of an art talk, a lecture or a panel discussion. It will be held at the end of the grant period, with the aim to publicise his/her research project and raise awareness about the grant. The modalities of this event will be commonly agreed between the candidate and Bengal Foundation.

7. The final text and additional research documents will be submitted by the grantee no later than 12 months after the initial disbursement of the grant.